A more qualitative approach would allow the ECB to signal its determination to act as a precautionary measure, without waiting for climate risks to materialise.

By including "environmental sustainability" in its strategic review, the European Central Bank (ECB) has signalled that it is taking seriously calls to integrate monetary policy into the fight against climate change, and more broadly against the ecological crisis threatening our societies and our economies. The time for decisions is fast approaching: the ECB is expected to conclude its strategic review in June 2021 and will probably announce its environmental strategy in the first months of 2021.

To contribute to this debate, the stakes of which are exceptional, we are publishing two notes on the role of central banks in ecological transition.

In this first paper, Wojtek Kalinowski & Hugues Chenet propose overcoming the obstacles that have so far prevented central banks and supervisory authorities from taking action: a continued strong commitment to the "neutrality" of monetary policies, a vain search for answers to the climate crisis in financial risk modelling, and finally a use of scenarios limited to purely quantitative exercises, such as climate stress tests. A more qualitative approach would allow the ECB to signal its determination to act as a precautionary measure, without waiting for climate risks to materialise. While a central bank cannot fight global warming on its own, it has many tools to succeed where "green finance" has failed. It should also be noted that the emergency measures adopted by the ECB in response to the Covid-19 crisis do not seem to have been calibrated using models as sophisticated as those proposed to combat climate change. 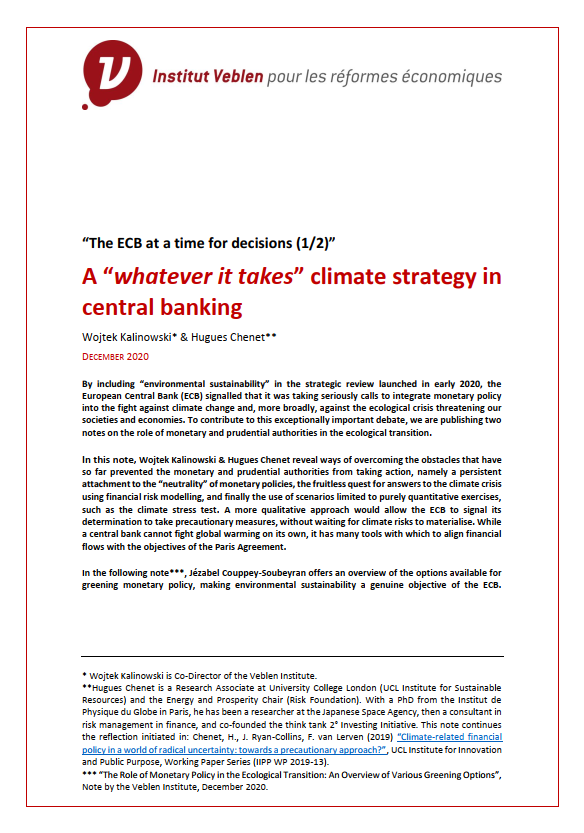 The case for a "Whatever it takes" Climate Strategy

In the following paper, Jézabel Couppey-Soubeyran proposes an overview of possible options for greening monetary policy, making environmental sustainability a fully-fledged objective of the ECB.