Many recent proposals for monetary reform have argued the need to create a new mode of money issuance, in which the central bank or an issuing institution would decide, within the framework of renewed democratic governance, to issue the amount of central bank money required to pursue given objectives—for example, certain investments in the ecological transition where conventional financing would prove insufficient—by allocating it to a particular sector: the government, households, companies, etc.

This note echoes these ideas, and proposes a “voluntary” mode of central bank money creation. The term “monetary transition” refers to the transition to this new mode of issuance, which could coexist with traditional bank credit money. 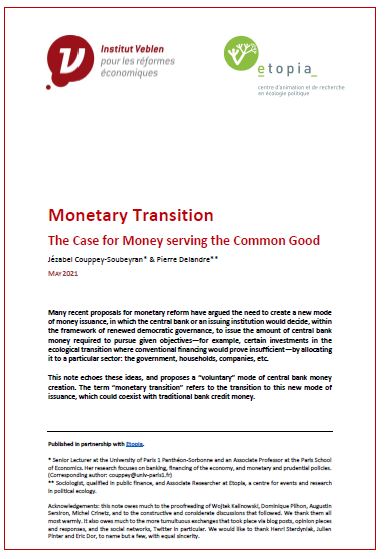 The monetary landscape is turbulent. Alongside monetary innovations such as cryptocurrencies and local currencies, various proposals are being developed aimed at reforming the monetary system, on either an ad hoc or a structural basis. These proposals include concepts such as “helicopter money”, the cancellation of public debts held by central banks, monetary “donation”, and Modern Monetary Theory. In response to the financial and pandemic crises, central banks are, for their part, pursuing “unconventional measures” at odds with their normal mode of action, providing unprecedented amounts of money to banks and financial markets. In some respects, this monetary turbulence resembles the turmoil of the 19th century, when the innovators of the time, heralds of the “banking principle”, called for a monetary system adapted to the needs of a fast-growing economy, freed from the gold standard, while the conservatives, defenders of the “currency principle”, clung to the traditional metallic definition of money.

In the eyes of today’s critics, the deterioration of living conditions and social and environmental degradation are the consequences of financial and commercial hypertrophy supported by the monetary system. In the wake of this observation, their proposals aim to put central bank money at the service of the common good, the ecological and social transition, or public investment.

Although they have their differences, most of the proposals for reforming the monetary system agree on the need to develop a new mode of money creation, in which the central bank—or an issuing institution—decides, within a framework of democratic governance, to issue the amount of central bank money required to achieve stated objectives by allocating it to a particular sector (the government, households, companies, etc.) and assigning it to a specific purpose (support for household income, business activity, public investment, ecological transition, etc.). In this note, we refer to this as the “voluntary mode of central bank money creation”, and we define the transition to this new mode of issuance as the “monetary transition”.

This form of money issuance would be different from current ones in two key aspects:

it would not be associated with any repayable loan or credit, or with any purchase of securities that could be resold, and would therefore be “without counterpart”;

and since no counterpart due in the form of reimbursement would cause the money created to return to the central bank, it would be “permanent” rather than temporary.

The debate begins. In our view, it is part of a historical pattern: whenever society has needed to, it has transformed the monetary system to suit its needs. As such, the “banking mode of money creation”, which stems from the banking principle, has supplanted the “feudal mode of money creation” and has responded, in turn, to the rising power of the market. Times have changed. Repairing social injustice, accelerating the ecological transition, guaranteeing employment and ensuring a minimum standard of living are all priorities and needs to which the market-based system is unable to respond. Proponents of this reform argue that transforming the mode of money issuance would do.

Based on our analysis, we argue this transformation has already begun. It started with quantitative easing, one of the unconventional monetary policy measures that involves central banks buying up financial assets. At present, the central bank creates more money by purchasing financial securities than by lending to banks. This transformation supports the financial sector, boosting its power by financialising money. The line between money and securities has never been so thin: issuers of securities now know that by issuing securities they are issuing quasi-money. However, quantitative expansion has shown that it is possible to move away from the banking mode of money creation; that debt is not necessarily the inevitable counterpart of money.

By being totally released from this counterpart, money could be used to serve the common good, oriented towards the spending needs of the real economy, of households, of companies, and of governments in particular, to support them and allow them to make the investments that are essential for the ecological transition. This new, voluntary mode of money issuance would not replace but complement current modes of money creation involving the granting of loans (banking mode) or purchase of securities (acquisitional mode). This coexistence would enable better distribution of monetary power and protect against its monopolisation by the financial sector.

We argue that this proposed reform would also involve adapting some central bank accounting rules to allow for the accurate recording and control of “permanent central bank contributions to public objectives”. Similarly, this new mode of money creation should be accompanied by new monetary tools for managing the volume of money in circulation and the absence of reflux. Finally, in our view, this method of issuance would lead to a more or less radical transformation of the independent and technocratic central bank into a democratic monetary institution, whose governance would involve all stakeholders.

In conclusion, societal transformations have always involved transformations of the monetary system. From our point of view, this means that society will not achieve its new objectives, first and foremost the ecological and social transition, without a monetary transition. More than ever, society needs money, once again, to be put at its service.