In the face of growing calls to end protection for fossil fuel investments, some proponents of the Energy Charter Treaty argue that the treaty remains an essential tool for protecting investments in renewable energies. In fact, it appears to be a wrong idea: in a rapidly changing climate and variable economic context, governments need to have the agility to quickly adapt how public money is spent in order to encourage the ecological transition. The recent pandemic and financial crises showed how quickly contexts can evolve and the necessity for States to sometimes review their policies. In some cases, after a first moment of strong support for renewables through public expenditures, governments had to reduce the subsidies as the market appeared to be highly competitive or because the initial supporting schemes had become unsustainable due to the decline in electricity demand or the unexpectedly enthusiastic adoption of the incentives by producers.

This has been the case in particular in Spain, Italy and Czech Republic, three countries that have been targeted by dozens of arbitration claims based on the ECT.

Overall, in October 2020, some 80 cases had been brought in relation to renewable energy, under the ECT alone, averaging a total of $21 billion claimed by investors. Similar claims may well target other States such as France in the future.

While some cases are still pending, many awards have been rendered over the last years. In most of the cases, the States have failed to defeat the investors’ claims. As an illustration, Spain, which faces the highest number of arbitrations, has been found to breach its obligation under the ECT in 18 cases (out of 23 in which an award has been rendered so far) and only managed to defeat all the investors’ claims in five cases . As a result, Spain had to grant more than one billion euros of damages.

This paper conducts an in-depth review of the publicly accessible awards. It looks in particular at the notion of predictability from a legal point of view and the different arguments put forward in the decisions. 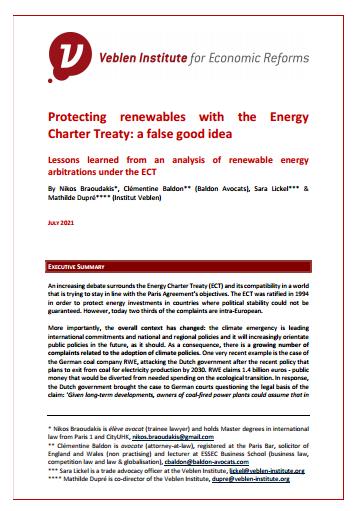