The European Commission is due to present a proposal for a border carbon adjustment mechanism on 14 July 2021. This mechanism should be a further step towards making trade policy consistent with our climate objectives.

In line with its climate commitments, the European Union must direct all its public policies, including its trade policy, towards limiting the rise in temperature to 1.5°C. The scope of its policies must extend beyond its territorial emissions and therefore include its imported emissions while encouraging the rest of the world to start decarbonising the economy.

This is where the future carbon border adjustment mechanism, the proposal for which is due to be presented by the Commission on 14 July 2021 can be a useful mechanism for both raising the European carbon price and ensuring that the prices of imports into the EU reflect their carbon content.

For the measure to be effective, the EU must be unimpeachable on the climate objective of the mechanism and call on Member States, international partners and the private sector to continue their efforts to reduce emissions. Raising the domestic carbon price, including the introduction of a carbon price floor to avoid downward fluctuations, and ending the free allocation system are necessary preconditions. A key element in the acceptance of this mechanism by Europe’s trading partners will be to prove, at every stage, that it is indeed a climate measure, not only in terms of its design and implementation but also the intended use of the revenue associated with this mechanism, including its allocation to the funding of mitigation and adaptation in developing countries.

This note outlines some of the important technical, legal and political considerations for an effective and fair carbon adjustment mechanism. 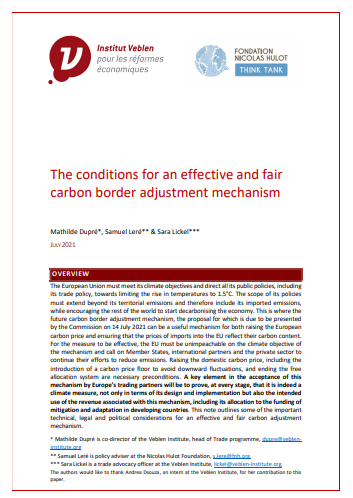