The European Commission has been advocating for years for the end of bilateral investment protection treaties between its Member States. These agreements were indeed vestiges of the past, useless in the European context resulting from the successive waves of enlargement. The decision handed down on 6 March 2018 by the Court of Justice of the EU (Achmea ruling) legally settled the debate by declaring these agreements incompatible with European law.

In response, most EU countries (23 countries except Austria, Finland, Sweden, Ireland and the United Kingdom) signed a plurilateral agreement in May 2020 through which they decided to terminate their bilateral investment protection treaties. The case of the United Kingdom is obviously specific in the context of Brexit. And Ireland had already terminated its only BIT with another Member State. But the situation remains unclear as far as Austria, Finland and Sweden are concerned.

This plurilateral agreement is important because it should make it possible to find an acceptable outcome to the 15 ongoing intra-European dispute cases on the basis of the intra-European BITs. It also puts an end to the sunset clause which provided that investments protected before the termination of an agreement continue to benefit from this protection for 20 years.

But under pressure from investors and several Member States, notably Luxembourg and Portugal, the EU now seems tempted to invent a new mechanism to give back to intra-European foreign investors the privileges they had through these treaties.

The European Commission therefore launched a consultation this summer to prepare proposals to this end. For the Veblen Institute and the Nicolas Hulot Foundation, this initiative is useless and could recreate new obstacles to the ecological and social transition. 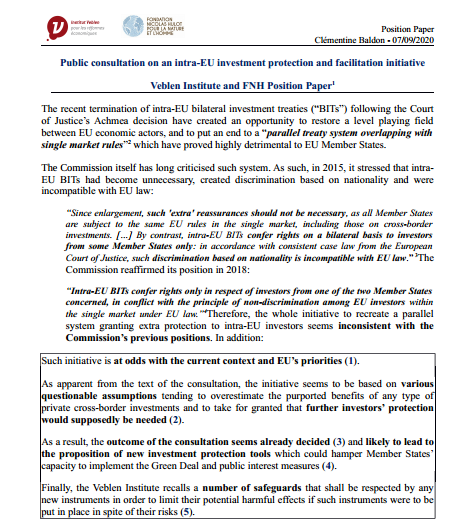 Moreover, a debate remains on the scope of the Achmea decision with regard to the intra-EU application of the Energy Charter Treaty (ECT). A number of Member States consider that the application of the ECT in intra-EU relations should no longer be possible. But this issue is not really addressed as such in the ongoing process of modernisation of the ECT. It is nevertheless essential because, to date, it is the most frequently used treaty in intra-European disputes between investors and States (45 known cases in progress).