Calls to save the Amazon rainforest, French and Irish requests to suspend ratification of the agreement with Mercosur in response to Jair Bolsonaro’s environmental policy, unprecedented mobilisations against CETA... The impact of trade policies on climate change, deforestation, the future of farmers and food quality cannot be overlooked any longer. New MEPs and European Commissioners will have to tackle this quickly or risk jeopardising the European project.

In a new report published on Thursday October 3rd 2019,The FNH and the Veblen Institute the two organisations identify 37 proposals for making trade serve the ecological and social transition, and call for a moratorium on ongoing negotiations to pave the way for what has now become an essential reform. 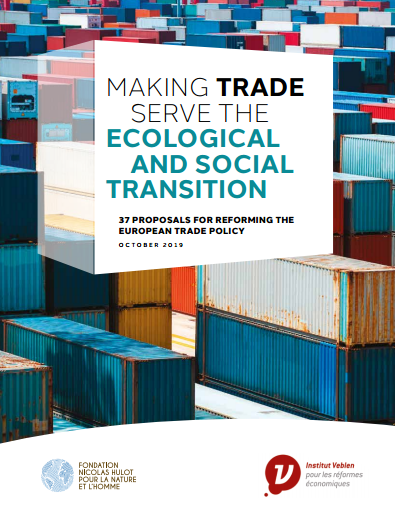 The FNH and the Veblen Institute point firstly to the crux of the problem: free trade is a dogma that goes unchallenged, since it is one of the main building blocks of the common market at the origin of the European Union. Trade is treated as an end in itself, regardless of its impact on society as a whole.

And yet, world trade rules, or rather the absence of binding social and environmental rules within the current trade policies, make it impossible to address the ecological and social crisis. Worse still, they contribute to the development of an unsustainable and derailed economic model that reduces the room for manoeuvre available to States in many policy areas, and gives multinational companies strong influence over public policy decisions.

Mathilde Dupré (Co-Director of the Veblen Institute) and Samuel Leré (FNH Advocacy Officer), authors of the report, stress that: “We are not against trade, but we are advocating a less rigid approach to trade so that it becomes a lever for the transition rather than a sticking poinr”.

37 proposals put up for debate

The FNH and the Veblen Institute formulate a series of proposals ranging from unilateral measures to changes in the way trade negotiations are conducted – the way agreements are negotiated, their purpose, the choice of trade partners, the tools to be implemented, etc. The aim is to put them up for public debate in the very moment when the new European Commission is defining its objectives, both at national and European level.

1. The EU should develop a real trade diplomacy with “carrots” and “sticks”. Being a market of 500 million consumers, the EU must choose its partners and use international trade as a lever for climate diplomacy, tax cooperation and human rights protection:

The EU must not only refrain from concluding a trade agreement with Brazil but should also adopt trade sanctions on Brazilian products that contribute to deforestation, such as beef and soya.

2. Include in all future bilateral trade agreements clauses suspending trade benefits in the event of non-compliance with international climate, social and fiscal commitments, and open negotiations to amend the agreements already in force accordingly.

Any exit from or violation of the Paris Climate Agreement must be subject to suspension of the trade benefits enjoyed by the country concerned.

3. Create an “agricultural exception” from all trade agreements and recognise that agricultural goods are not commodities like others. In addition, refuse the access to the EU market for foodstuffs produced according to practices that are banned within the EU.

The EU produces and exports pesticides that are considered dangerous and banned in the EU itself. The member countries then import agricultural products treated with these same pesticides, which end up on the plates of European consumers. The penalty is therefore threefold: farmers suffer from unfair competition, ecosystems are being destroyed while citizens are unknowingly poisoned by these toxic substances.

4. Implement a carbon tax at EU’s borders, or any other policy tool with the same effect, in order to combat climate change while ensuring a level playing field for European producers and limiting the risks of carbon leakage.

International competition should no longer be an argument against strengthening European carbon pricing mechanisms.

5. Abolish arbitration tribunals and establish binding rules on respect for human rights, including in the context of the UN treaty currently being negotiated on business and human rights.

In France, in 2017, the Canadian company Vermilion threatened the Council of State with legal action when the law banning hydrocarbon exploitation was examined, and won its case because the government withdrew the denounced measure, considerably weakening the scope of the law.

Since the trade agreements currently under negotiation establish the framework for economic exchanges for decades to come, there is no time left for a gradual ‘greening’ of individual chapters. The implementation of such a reform also implies suspending the ratification of the agreements just finalised with Canada, Vietnam, Mercosur and Singapore, and an instant moratorium on the negotiations in progress with the United States, Australia, New Zealand, Mexico and Indonesia.