Abandon the Energy Charter Treaty or miss climate goals : the European Commission will have to decide

Following a ruling by the EU’s top court, we have written to the European Commission together with ClientEarth, Climate Action Network Europe, Friends of the Earth Europe, International Institute for Sustainable Development, PowerShift, SOMO and Transnational Institute, calling on the Commission to encourage the EU and Member States to leave the climate-sabotaging Energy Charter Treaty (ECT) or miss its climate goals. 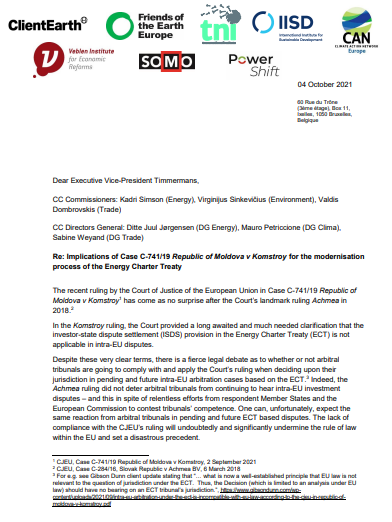 The ECT is an outdated investment treaty which contains a controversial “investor-state dispute settlement” mechanism – a tool which allows companies to bypass national courts and sue states for billions in compensation in secretive private tribunals, notably when environmental or climate action affects their economic interests.

A ruling by EU Court of Justice on 2 September 2021 confirmed that using the Treaty’s mechanism for intra-EU investment disputes is not compatible with EU law. But we know that this judgment may not stop EU investors and companies from pursuing billions in ‘compensation’ before arbitral tribunals for legitimate regulatory changes, like coal phase-outs, that are urgently needed to meet EU climate targets.

In the letter, we explain why the only solution is for the EU to withdraw from the ECT.

“The EU has a crucial and leading role to play in addressing the climate emergency, but its continued membership of the Energy Charter Treaty is an act of stunning self-sabotage. The Treaty is basically a trump card that climate-wrecking businesses can play every time a government lays down positive climate policy. This risks creating a chilling effect where governments feel hamstrung and won’t dare introduce the changes we need to see, for fear of legal action. Though we now have a ruling that outlaws investment arbitration in the EU, it is highly feared that the shadowy tribunals overseeing these disputes will not comply. Letting investors and arbitrators ignore the Court’s recent clarification would undermine the rule of law in the EU and sets a horrendous example."according to ClientEarth trade lawyer Amandine Van Den Berghe

Polluting corporates are actively using the investor-state dispute mechanism to seek compensations for their stranded assets. This year, German coal giants RWE and Uniper both brought cases against the Netherlands for its decision to phase out coal by 2035, claiming combined damages of around 2.4 billion Euros.

The Commission has attempted to modernise the ECT and bring it in line with climate objectives – but efforts have been hopeless. Now, member states like France, Spain, Poland and Greece are all considering leaving the treaty.

The letter calls on the Commission to start preparing for a coordinated EU withdrawal, together with Member States. This should include abolishing the “sunset clause” – which allows disputes related to existing investments to be brought up to 20 years after a party has left the treaty. (see the proposal from ClientEarth and IISD).